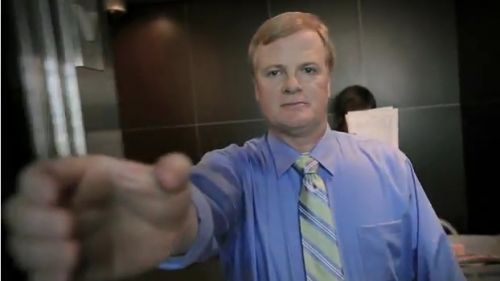 No, Kevin Butler is not trying to force choke you.  If he was, you'd already be dead.  He's simply demonstrating a way for you to win some cash monies in a new Uncharted 3 contest.   If you have a webcam, some free time, and some rock-solid deltoids, you can win yourself $10,000 bucks.  That's right.  Ten. Thousand.  Dollars.  That's like a bazillion nickels, or all of the pennies in the whole world*!  Simply go to grabthering.com, register, start up your webcam, and grab that damn ring.  Then hold it for (as of this writing) at least 8 hours, 48 minutes, and 36 seconds.  You didn't thing it would be easy, did you?

This is how it works.  Whoever holds the ring for the longest amount of time for one day will win $500 bucks!  Whoever has the best time after the contest is over  will receive $10,000.  The contest ends on November 15th.  Hold on a second!  There's more... Kevin Butler knows that not everyone is as manly as he is, so he made Sony shell out prizes to almost anyone who gets involved.  You can see all of the available prizes after the break.

Since I have about a minute and a half of free time, I tried it out.  I held the ring for two minutes.  That may not sound like a lot of time to you, but that extra thirty seconds counted as my lunch break.  Not only did I have to hold the ring, Kevin Butler made fun of me while I was playing!  It was kind of awesome.  I received a code for an Uncharted 3 in-game cash reward.  Huzzah!  I'm such a nice guy, I'll post the code after the video

Watch Kevin Butler kevinbutler-up (yes, his name is also a verb) the contest in this video. Kevin Butler!

As promised, here's my code for the in-game cash reward.

Don't say I never gave you anything.

*$10,000 dollars may or may not be all the pennies in the whole world.  My fact-checker took the day off.