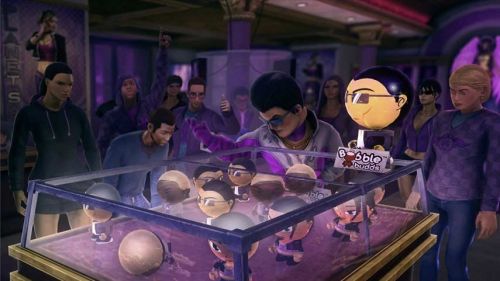 Of all gaming platforms available, there is one that can be pimped far more than any other; the mighty PC. You can take a basic PC and cram it with bling; more memory, a better motherboard, funky lighting - it’s the daddy of slickness. Now the PC can lord it over the likes of the 360 and PS3 even more, as their version of Saints Row: The Third will have exclusive features. Pimpin'.

Saints Row Video Mode will allow gamers to record whilst playing and share their bizarre antics with friends. To make your videos even more cinematic, you can remove the HUD so your video will look like a feature film. If feature films contained computer game characters doing unspeakable things to one another. A slightly less useful PC-only addition is the Bobble Head mode. I have no idea why you would want to turn all the characters into Bobble Head wearing headshot magnets.

If the idea of recording yourself running around an insane city with a giant head appeals, you are going to need the PC Specs to run the game. Thankfully these have been provided:

Is your PC Pimp enough for Saints Row: The Third?  And if it is, should you really be allowing your PC to go out pimping?