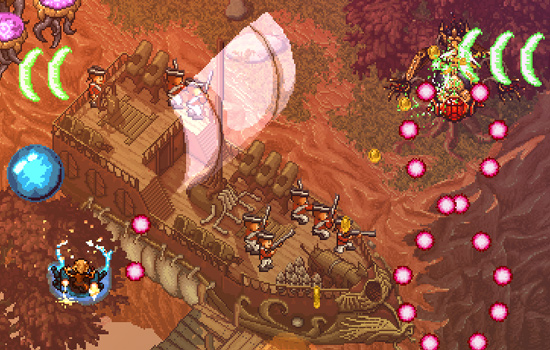 Remember, remember the fifth of... well, you know the rest. Indie developer Final Form Games, designer of the spectacular four player co-op 'shmup Jamestown, certainly does. They've announced today on their website that the first DLC for the game will be hitting soon, and it brings with it a new ship and perhap a few other surprises based around the historical event of November 5th...

As you can see from the site, the DLC is scheduled for release next Thursday, the 10th. Every day between now and then, more details about what this content will add to the game will be released. For now, though, the most we know is that a new ship, the Powderkeg, will be included in the already diverse array of ships available. What's more, it seems he may not be alone.

From the current announcement:

His conveyance utilizes the latest Alchemical technology to transport great hulking barrels of gunpowder into his orbit. These oversized Grenadoes drift in a lazy circle around him, spewing volleys of energy to supplement his main vulcan cannon, until he activates his Special Attack.

But it is this Special Attack that makes his ship worthy of its pilot: upon activation, his frontmost barrel is catapulted to perhaps 8 yards ahead of him, where it explodes in a sizeable mass of fire and debris. However, if he opts to hold down the Special Attack lever, the barrel will only explode when he chooses to release it. After some practice, Percy found he was able to place each of his barrel-bombs within a few inches of his target before detonating them (with devastating results).

But brawn alone cannot guarantee success on such a dangerous errand. Such a man needs be accompanied by someone more concerned with speed and precision, than blast and bluster...

There were some vague hints about there being more Jamestown in the works when we interviewed the guys back in August. Hopefully, we'll also receive news about the game's soundtrack becoming available soon as well.

If you haven't had a chance to try out Jamestown, now's a good time to start!