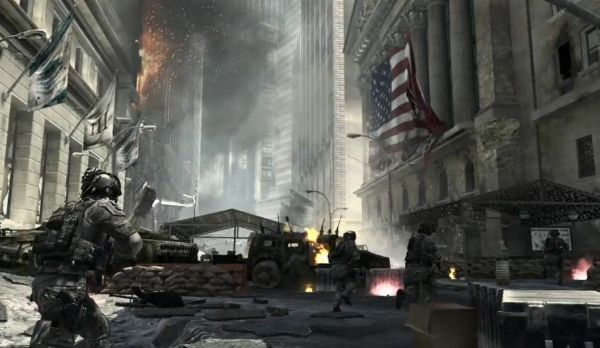 This week two gaming juggernauts will clash in a head to head battle.  It's the old guard versus the young upstarts in an all-out war for global domination!  When the dust settles only one game will reign supreme!  Are you ready for this digital THUNDERDOME!?!  I can't hear you!  Are. You. Ready!?  Then let's get it on!  It's the Black Eyed Peas Experience versus Nickelodeon Dance!  Oh yeah, another military shooter is coming out.  Big whoop.

Call of Duty: Modern Warfare 3 (360,PS3,PC)  If you're not picking up this game, chances are you know someone who is.  The mega-shooter has a batch of co-op missions to play when you get sick of being murdered by foul-mouthed children. 2 player local co-op, 2 player online co-op

The Black Eyed Peas Experience  (360,Wii)  apl.de.ap and co. bring you this singing and dancing extravaganza!  With songs like "Let's Get is Started," "I Gotta Feeling," and "Boom Boom Pow," you can't not play it!  4 player local co-op

Happy Feet 2: The Video Game (Wii,PS3,360)  It's got dancing penguins, people!  Their names are Mumble and Ramon, and they are fab-U-lous! 2 player local co-op

Nickelodeon Dance (360,Wii) This kids-friendly dancing title features songs from some your favorite Nickelodeon shows, including "We Did It," "Al Rescate," and "Here We Go."  They're probably about friendship and sharing and stuff.  Yay!  Learning!  2 player local co-op

Rabbids: Alive & Kicking (360)  Wow.  Check out the box art for this sucker.  See how the woman on the couch is cheering as the guy stomps on a Rabbid? It's called a crush fetish, and these people should be thrown in jail.  Looks like we've got some bondage going on in the upper left corner.  What's this game rated, anyway? E 10+?!?!!?  What the hell is wrong with you people?  4 player local co-op

Fusion: Genesis (XBLA)  This is a cool-looking twin stick shooter reminiscent of Privateer/Freelancer.  The dynamic missions and PvP zones give it a MMO vibe.   4 player online co-op