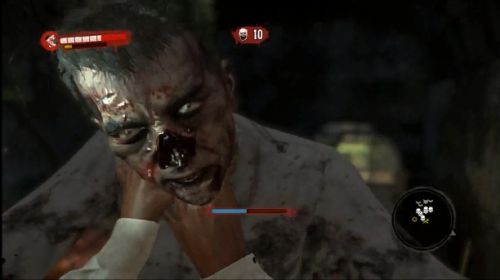 I know, I know, you're ready for 5 o'clock and the long weekend, and you don't feel like reading.  That's okay! Check out our Co-Op Impressions video after the break.  It's wa-a-a-y bloodier than reading!

Special thanks to Co-Optimus community member justabaldguy, aka "Baldy."

After downloading the pack you may notice that nothing has changed on your menu screen.  That's because the DLC itself is accessed via fast travel with your established character, so you won't see a "Bloodbath Arena" option.  It's an actual location in the Resort Area.  You could walk there, if you feel like getting the exercise. There's a little story to it, which makes it feel integrated into the gameplay experience, unlike your standard tacked-on survival mode.

Each arena has it's own preset skill level as well as it's own unique look and hazards.  You'll fight waves of increasingly powerful enemies, earning XP, cash, and new weapons.  There are also challenges in each wave, such as "Use Only Blunt Weapons" or "Set Five Enemies on Fire."  These challenges become competitive when you're playing with someone else.  The first player to complete them will receive the XP bonus.

You'll need every reward you can get, since your weapons will degrade just like they would in the regular game. You can find workbenches in the arenas, but you'll quickly realize that the enemies won't drop enough money for high level weapon maintenance. I think I got him.

Once you're in a match, the drop-in mode of the co-op is disabled, so people won't be joining your game mid wave.  You can leave at any time, but when you return, you'll have to start over from the beginning.  Dying solo, (or all at once as a group) will also reset the wave counter.

The arenas themselves feel just big enough for four players.  They really enhance that "fight or flight" feeling that overcomes you when you realize your weapon is about to break and there's still a dozen bloodthirsty zombies at your throat.  Oh, and Baldy wanted me to mention that the baddies can spawn right in front of you. They can. They can also spawn right behind you.  It's kind of awesome, and it kind of sucks.

Overall, the Bloodbath Arena is a fun addition to Dead Island.  If you're still playing the game, you'll definitely want to pick this up.  If you haven't touched the game in a while, it might be worth revisiting.  It all depends on how much you like zombie stomping.  There are also new weapon mods hidden in each arena, which is a nice touch for collectors.  The DLC includes 10 more Achievements worth 250 points, or 10 Trophies (7 bronze, 3 silver).

The Bloodbath Arena DLC is available for free via a code included in Dead Island: Special Edition pre-orders.  If you don't have a code it will cost you $10 bucks or 800 MSP.