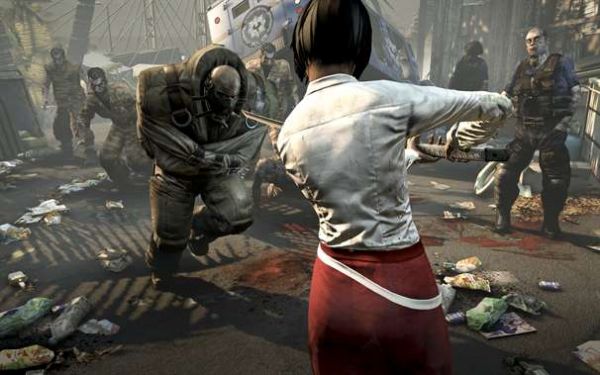 Good news, PC gamers!  Right now you can pre-order Dead Island from Valve's digital distribution service, Steam.  You'll not only get some bonus content, you can also get a copy of the game for FREE!  Individual copies of the game are going for $49.99.  If you buy the special four pack for $149.97 you and three friends can save about fifty bucks.  Since the game supports four player co-op, this is a no-brainer.  If you get three buddies together that means you'll each get a copy for about $37.50!  Hooray, savings!  Or, one of you can mooch a free copy off of your three friends who paid full price.  Hooray, friends who are gainfully employed!

As far as the bonus content is concerned, if you pre-order Dead Island you'll acquire "the Ripper," which is a delightful looking baseball bat/buzzsaw combination.  You'll also gain access to the Bloodbath Arena, which seems to be yet another survivor mode.  Can we make a game without a survivor mode?  NO!  The good news?  Loot and XP will transfer over to the campaign!  Read on to see all the arena features. Bloodbath Arena features:
- 4 deadly and hazardous Arenas with endless waves of zombies
- Play in single or co-op multiplayer!
- Loot XP and items and bring them over into your campaign
- Leaderboard to challenge your friends
- New gruesome weapon: Sonic Pulse Grenade

The Bloodbath Arena will unlock one month after Dead Island's release.  I'm guessing this content will probably cost console folks 10-15 bucks, but we'll see.  Dead Island was our E3 2011 Co-Op Game of Show.  Features like strong RPG elements as well as a large, non-linear world make it much more than a simple zombie game.  We can't wait for this one to launch in early September.  Dead Island features four player online co-op, and is also available for the Xbox 360 and PlayStation 3.