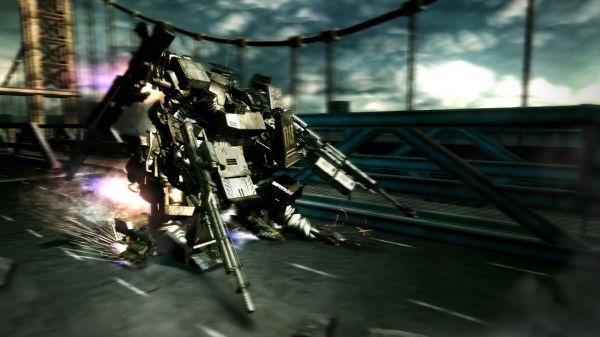 Do you like big, sweaty mechs heaving against each other?  Really?  That's weird.  Armored Core V is the long awaited continuation of the Armored Core franchise.  Highly customizable, turbo charged war machines do battle in a new team-based mission structure.  The new system is a departure from the game's old play style, focusing more on tactics than run-and-gun gameplay.

If you want to check out these new mechanics, you're in luck.  A demo launches for Armored Core V tomorrow.  Andriasang provided the following details:

-The demo will be available for download form January 19th through January 23rd.

-It will require about 1 GB of memory.

-Online play will allow players to:

Still curious? Check out this video.  Fair warning, it's all Japanese, but the gameplay looks pretty boss.

I don't know what I'm watching, but I know that I want it!

After the servers are shut down, you will still be able to create and join teams, customize your mech, and play the story and tutorial missions.  There will be more features, both online and off, present in the full game.

None of this information has been confirmed for the U.S., which shouldn't be a problem if you have a PS3 or 360 with a Japanese account.  Armored Core V will be out on March 20th for the Xbox 360 and PlayStation 3. It supports five player online co-op.