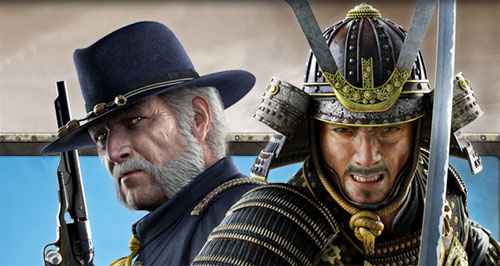 A bit over a month ago, we told you guys about the upcoming stand-alone expansion for Shogun 2, entitled Fall of the Samurai. Now we have some word about some preorder bonuses for said game. Whether you preorder online from Steam or the SEGA Store or preorder a boxed copy anywhere else, you'll receive one of three exclusive preorder faction packs. Steam will get you the Tsu Faction Pack and the game's soundtrack while the SEGA Store will net you the Obama Faction Pack (and no, I don't mean you can send batallions of the president's clones into battle). If you don't like digital versions, preordering a boxed copy from another retailer will grant you access to the Saga Faction Pack as well as grant you a double-sided poster. Full details on these packs are as follows:

* The Steam exclusive Tsu faction pack, "The Emperor’s Cunning" - Rising from humble roots, the people of Tsu are wise, artful and astute strategists. Their use of Ninja is unsurpassed on the battlefield and in covert operations. This additional in-game faction is only available in the Steam Special Edition.

* The SEGA Store pre-order exclusive Obama faction pack, "The Overseers" - With long experience of government and administration, the authoritarian people of Obama are unsurpassed in controlling people and trade.

* The Limited Edition exclusive Saga faction pack, "The Emperor’s Diligence" - Centuries of trade with outsiders has given the people of Saga an understanding of foreign and modern ways, allowing them to adopt new military technology quickly.

Fall of the Samurai is due out in March, giving you a couple of months to make your according preorder choices, if that strikes your fancy.