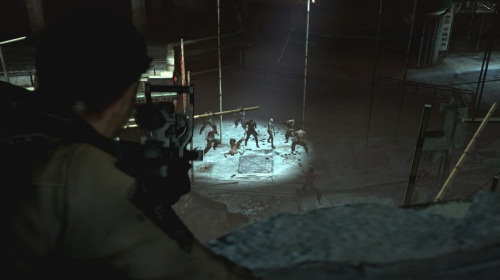 When Resident Evil 5 was released a few years back, many fans of the series scoffed at the new direction the game was taking.  An action based cooperative shooter with horror elements, leaving behind the slower paced horror and perhaps the best game of the series in RE4.  Resident Evil 6 expands on the legacy that five created, with a stronger focus on co-op gameplay but bringing in characters from numerous Resident Evil games to appease fans.

Resident Evil 6 launches today on the Xbox 360 and PlayStation 3 with a PC version launching sometime later this year.  The console versions feature a two player online or couch co-op campaign.  There is also a two player co-op Mercenaries mode and various other hybrid modes that support more than two players.

E3 2012 Hands on Impressions - "RE6’s controls are better suited for an action game. Yes, you can move and shoot! After we finished up the Chris and Piers mission we moved on to Leon and Helena’s level. Not only did our HUD change, we found ourselves in what appeared to be a different game altogether..."

Four Player Co-Op On Display - One thing we're still not clear on is exactly how the "cross over" moments are going to work.  In these sections, the campaigns meet each other and culminate in giant boss battles for four players.  We'll be digging into the game this week to try to figure out exactly how this works.

Resident Evil 6 Demo Available - Of course, you can download the demo and get a taste of the game before buying.

PC Version will be delayed for some time.

From Around the Web - While we don't have a launch day review up, the embargo for the game was up yesterday.  Review scores were across the board ranging from a 3 out of 10 up to a near perfect score.  The current metacritic average is sitting just below a 70 out of 100.  As usual, a lot of the reviews didn't talk in detail about the cooperative experience and whether or not playing the game with a friend could help overcome some of the shortcomings in the game.    Here are two polarizing reviews - Game Informer (Good) - Polygon (Bad).

We'll have our full review of Resident Evil 6 up next week.