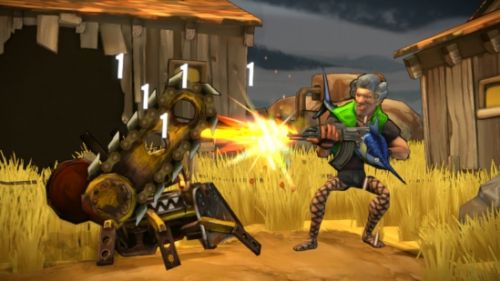 I have seen many customizable options in my day, but nothing quite like this.

As shown in a new update from the Demiurge blog, players will be able to outfit their gunslingers with a huge wardrobe of accessories in their upcoming title, Shoot Many Robots, scheduled for release next month. Not only will the clothes give you tons of aesthetic options, but they will (except some of the ones featured for comic relief) give you specific stat bonuses to your character and will increase the game’s strategic value at the same time.

I mean, if you’re going to play a game, you might as well have some goofy, casual fun with it. Since it's a sidescroller, you'll be seeing a lot of your character and it may get old fast if you can’t really differentiate between you and your co-op partner's character selection. With this update, however, it will be a piece of cake to mix things up. Essentially, this addition will give you the ability to customize your character however you please. You want to be a "Speed" class? No problem. "Explosive" expert? Got that covered. A "Jack of All Trades"? Say no more. Whatever fits your play style, this game will provide your personal character. Even for the hardcore gamers out there: you can make it your mission to find the right combination of accessories to play the ultimate character. It's all up to you!

Check out the trailer featured on Demiurge’s blog below!

Even the video seems like it has a huge crush on Team Fortress 2 "character classes", using examples on some of its counterpart classes like the “Heavy” or “Rocketman” a.k.a. "Soldier". But that's the beauty of it all. You can make your character look like and play like however you want, which is something not many sidescrolling shooters are known for. I mean, who wouldn’t want to watch Arnold Schwarzenegger kicking robot ass in a tutu and fairy wings, right?

Shoot Many Robots will be making its way to the XBLA, PSN, and PC on March 14th.