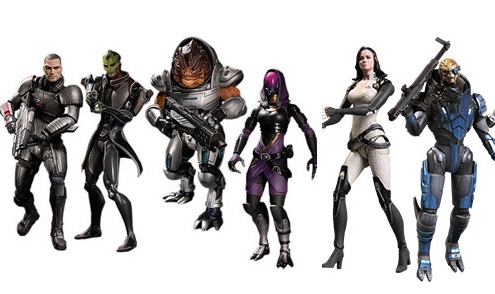 When the massive chunk of plastic that was Skylanders arrived at Co-Optimus Towers, who would have thought the game would have walked away with the maximum 5 out of 5? EA know a good thing when they see it, so they have attached DLC to one of their own range of figurines. However, this is no kid friendly game, but the highly anticipated Mass Effect 3. Buy one of the new range of models and get some randomized DLC for the Mass Effect 3 co-op mode - gotta catch 'em all?

The Biowarestore has an interesting listing for the new figure sets:

These products contain codes that can be redeemed for a downloadable content pack for Mass Effect 3 multi-player. They are slightly randomized during the registration and could include powerful new weapons and new characters. The pack could also include character boosters, weapon modifications, and weapon upgrades to make your multi-player squad stronger. (Only supported on XBox360 and PC.)

The DLC is for the multiplayer aspect of the game and will be slightly randomized. Therefore, even if you buy all eight collectables, you will still have different DLC from other people. This could mean trying to collect all the DLC is incredibly expensive! Perhaps more intriguing is that the DLC is only valid for 360 and PC owners, why no Playstation 3?

The 8 collectables are due out sometime in the April/May of this year - can they take on the might of Spyro and pals?