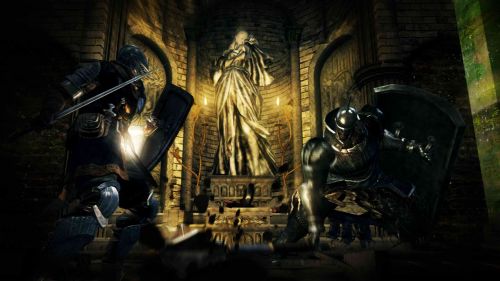 In a recent interview with Dark Souls’ creative director, Hidetaka Miyazaki, his thoughts on the design processes reveal his uncertainty of a future sequel.

After being introduced to Dark Souls in November, the game showed us a truly epic experience of which many of us where dying to play more of. Since then, it has received many good reviews for its design, difficulty level, and creativity. However, with some clearly obvious design flaws within the game (where lots of people are complaining about experiencing), will these mistakes put a premature "nail-in-the-coffin" for a possible Dark Soul sequel?

The horrible frame rate at certain points of Dark Souls has had a crippling effect on the gameplay, most notably being New Londo Ruins and Blighttown, which Miyazaki has clearly addressed:

Yes, there were technical difficulties. I don’t believe that it’s okay to have them, but realistically speaking, it was quite a large-scale game – even in terms of budget and expectations. So we’re very sorry for the trouble we’ve caused by our processing errors and bugs from Japan. It was a title that we haven’t really experienced in all aspects, so there were areas where we felt our technical side couldn’t keep up with the game’s scope, like an increasingly growing ache. I didn’t mind the growing pains. We accept the game as it is, and that it’s just a part of the learning curve.

Technical difficulties are bound to happen when designing a new game. Learning from these mistakes will allow them to make the game even better for the future. But will Dark Souls even have a future?

When asked if Bandai would be making a sequel to Dark Souls, Miyazaki's uncertainty emerged. He stated:

We don’t even know if we’ll have another chance. We have the confidence that we can improve from our mistakes this time and create an even better Dark world, but we don’t know if the users will forgive us for the mistakes, so I cannot give an exact answer.

Now, most game review sites and magazines have given Dark Souls (on average) a solid “A” or “9/10” for its quality, and this should be no surprise to anyone who’s played it. Not only does it provide a worthy challenge comparatively to most other games out there, it “wows” us with its smooth controls and jaw-dropping visuals. Even the multiplayer has gotten better over time. Minus the hiccups in design, Dark Souls is almost destined to inherit another title.

But what do you think? Should Dark Souls have a successor, or should its spirit move onto the afterlife? Miyazaki said their team has the knowledge and drive to make a game better than the original. All that remains now is our genuine support, because, in the end, it really all depends on if you (the consumer) are willing to give the game another opportunity at greatness.