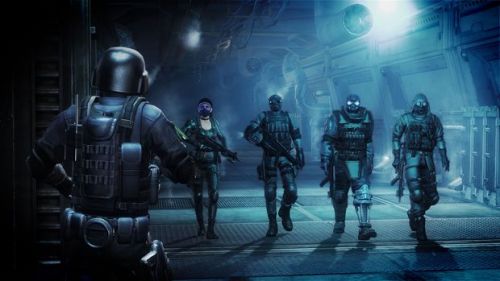 Just a couple of short months until release, players now get a chance to soak up some footage of Capcom’s newest title, Resident Evil: Operation Raccoon City, in this featured 10 minute video.

Set during the time of Resident Evil 2 and Resident Evil 3: Nemesis, a team of Umbrella agents of the USS (Umbrella Security Service) enter Raccoon City to undertake covert operations which parallels the “good guys” of the main Resident Evil storyline, such as Leon Kennedy. If you haven't already seen the epic trailer for this game, watch that first.

But enough premise talk. Let’s get to the main video where our hopes for this game manifest into one click of the button:

Now, a lot of fans are questioning the style change of this game comparatively to many other modern shooters, and it may also be intimidating those looking for a more classic, Resident Evil experience. While it does seem to emphasize the shooting and not the survival in this video, don’t be taken back from Capcom’s attempt at evolving such a long standing series.

Third-Person shooting hasn’t been foreign to this franchise, as mega hits in the series like Resident Evil 4 utilized this point-of-view and have remained successful. Operation Raccoon City, however, looks to be taking that sort of style to the next level in the series. Yes: may imitate many modern shooters. Yes: this video doesn’t show them fighting zombies. Yes: believing this game will be a failure is a bit foolish.

Keep your minds open and your chins up people. If anything, this game will undoubtedly bring you a new perspective and experience of the Resident Evil universe, as well as some interesting new opportunities to explore the fall of Raccoon City with a buddy or three alongside you.

Again, Resident Evil: Operation Raccoon City will release here in the US on March 20th for the 360, PS3, and PC.