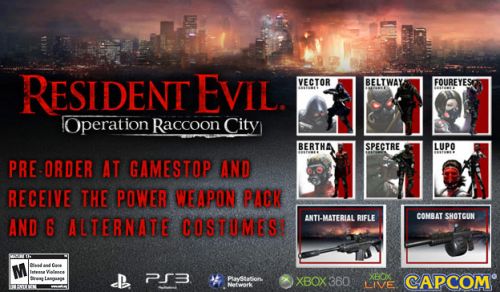 Don't you hate it when each retailer offers a different piece of preorder DLC and you just can't get them all without skipping out on paying your rent? Sometimes you can buy the DLC later online and sometimes you can't. Well, everyone has a fair chance at Resident Evil: Operation Racoon City's preorder DLC. The game may not be out until next week, but for some reason you can buy its DLC packs right now at Xbox.com.

As far as I can tell, the same costumes are shared between each pack, making the weapons the real differentiator. We won't know for sure until the game launches though. The Weapon Stash and Costumes pack seems to include all of the other packs' weapons, so it would be the one to buy if you've gotta have the whole arsenal. Of course, none of these packs should be necessary for gamers who pick up the Resident Evil: Operation Racoon City Special Edition. It includes:

The costumes aren't actually listed, but since they are included in the 'Weapon Stash and Costumes Pack,' their inclusion would seem likely.

What do you think about Xbox.com selling preorder DLC to people who didn't preorder the game? Even though most of these packs don't seem like a tremendous value, I'd rather have the option of getting them than not. As for listing them before the game even comes out, that's got to be a mistake on Microsoft's part. But it certainly alleviates concerns about where to buy the game (and perhaps which edition to get).