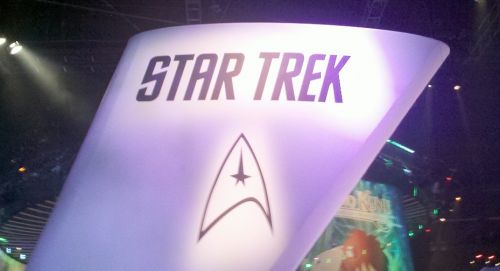 Namco Bandai proudly displayed their new cooperative Star Trek game at E3. Once past the booth-babe-bookended Captain's chair I entered the Star Trek theater.  The game was presented on two side by side displays in glorious 3D. While we couldn't play the game ourselves, Star Trek was demoed in a playable build, and it looked pretty sharp.

Using some technological voodoo, a single pair of glasses allowed me  to view the 3D images on two separate displays. Like most 3D experiences, I didn't notice the effect after a minute or two. I just kind of became numb to it. Namco is pushing the game's 3D capabilities, and they are impressive, it just didn't do that much for me, personally.

The presenters called the gameplay "asymmetric co-op," which I took to mean the two characters will experience the game differently. You can see portions of the demo (albeit, in 2D) in the following video:

Kirk and Spock (voiced by the motion picture's Chris Pine and Zachary Quinto) each have their own unique gameplay perspectives. What you don't see in the demo are the sections leading up to the fight at 1:08. The duo trade witty banter throughout the game. Quinto's Spock is a little too detached for my taste, but that's kind of his thing.

After they beam down to "New Vulcan," Spock uses his trusty Tricorder to take several readings of the environment. The pair also use a little syncing minigame to unlock a door. Phasers have different settings, and Spock's Vulcan "nerve pinch" and "mind meld" both come into play. The whole game screams "Star Trek," which is a good thing.

Players will clearly have different experiences depending upon which character they use to play the game. I'm sure many fans will want to play through the story mode at least twice so that they can see everything.

The recently announced enemy race, the Gorn, certainly make an impression. The reptilian creatures are quick, powerful, and packing energy weapons. I'm curious to see if they develop into anything more interesting than screeching lizard men. Either way, they look fun to shoot.

Star Trek supports two player local or online co-op. It should be out early next year.