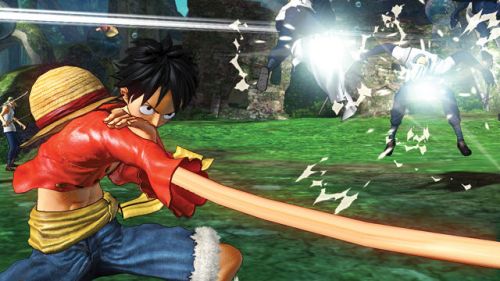 Not being able to understand Japanese doesn’t prevent us from looking at a trailer of One Piece: Pirate Warriors and smelling some potential co-op action in the works.

In honor of the hit Japanese comic (or “manga” as nerds like us rather call them) “One Piece”, Bandai and Tecmo Koei have come together to bring us One Piece:  Kaizoku Musou or “Pirate Warriors” in celebration of the franchise’s 15 year long anniversary. With this game, both developers are looking to make the ultimate One Piece game worthy of the success of the manga and for the undying support of its hardcore fan base.

Looking to be much like a Dynasty Warriors style of gameplay, you’ll see the main character of the series, Luffy, knocking the stuffing out of dozens of navy officers and teaming up with his fellow crewmates to take on the entire pirating world. Obviously taking place far into the storyline (I’ve only read the manga as far as the Baroque Works arc), the character selection seems adequate enough for any diehard of this lengthy series.

Here’s a small, Japanese taste of what you might come to find from One Piece: Pirate Warriors:

Though there isn’t any official announcement of co-op play here, the back of the case states that it will support 1-2 players. The question being, however, is will we being seeing versus or co-op play included? Much like many Dynasty Warriors games, co-op is one of the key successes of Tecmo Koei’s franchise, and, logically, it makes sense for co-op to be included. But, until we learn more (or learn how to read kanji), we’ll just have to watch and wait from afar.

So far, there isn’t any stated release date for here in the US, but newly filed trademarking suggests its Europe and North American release in the possible future. The game is marked for released in Japan on March 1st for the PS3.