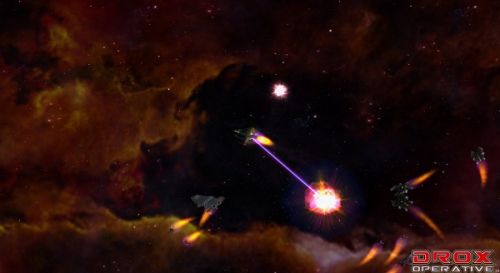 Din's Curse was a completely underrated Action/RPG on the PC.  With near infinte amount of players and some truly dynamic core systems, we couldn't help but give it a 4 out of 5 in our review.  The two man development crew of it, Soldak Entertainment, is back with new game.  Like Din's Curse it's an Action/RPG - unlike it though it's all about space and ship to ship combat.  The game is called Drox Operative and we're quite excited about the co-op possibilities of this one.

Drox Operative will break some traditional Action/RPG bounds by not using a class based system, instead the player customization and abilities come from how you outfit and customize your ship.  This makes it sound like loot collecting is a big part of the game.  Of course to get that loot you're going to have to go into combat.

Battles are fairly quick conflicts fought in real-time, but are focused more on tactics rather than good reflexes. You decide where to pilot the ship and which weapons or other ship components to use and when. Targeting of enemies is fairly automatic, although you can control this when you want. The usable components are usually direct weapons like Fusion Beams and Neutronium Cannons, but can also be more indirect weapons like Fighters and Anti-Matter Mines, active defenses like Flares and Decoys, consumables like Nanite Repair and Energy Spikes, and special abilities like Stasis Fields and Tractor Beams. There are even doomsday devices like Grey Goo. Most of these use up your energy reserves though, so you have to be careful how fast you burn through it.

You also have to concern yourself with the health of your ship. First you have quick, recharging shields that protect you, then a layer of armor, and then the actual structure of your ship. You really don’t want an enemy to get through the shields and armor, because along with damaging the ship’s structure, it will also start doing damage to your components. Losing one of your main weapons or an engine is a quick way to be destroyed.

Soldak promises the same sort of dynamic gameplay that was evident in Din's Curse.  There's an entire galactic war going on throughout your campaign and you are just a small part of it.

There's no word yet on the official number of players supported in co-op, but co-op is definitely a focus.  Soldak hopes to ship the game early this year for PC and Mac.