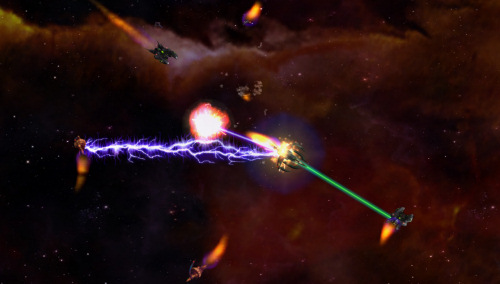 Soldak Entertainment have released a demo for Drox Operative, a space ship combat RPG for the PC.  While the game isn't exactly like "Diablo in space," it does remind me of another classic PC game - Star Control.  It's a little less twitch based, but there's huge galaxies to explore and lots of ship to ship combat to engage in.

The demo gives players free reign to check out the game, though it caps out at level 6 for your ship.  You can choose any of the game's 10 races, each with their own unique ship types and bonuses.  Game play itself is a mix of exploration and combat, and while the combat itself is somewhat automated, you do have control over your attacks and which targets have priority.  Obviously a big draw for a game like this is the ability to customize and upgrade your ship, which you can get a small taste of in the demo.

The full game lets you play co-op, teaming up for quests and taking on the large groups of roaming enemies in the galaxy.  Sadly, co-op isn't available in the demo, but it's still worth checking out,  if only to get a feel for what Drox Operative has to offer.  I found the demo fairly impressive and there's a lot of potential here for a really addictive game.

Explore a dynamic and evolving galaxy
Explore a unique sector of the galaxy in every game, with different "monsters", ship components, quests, and even races
Fight in the galactic war between the various alien races
Battle hundreds of different enemy starships
Build the coolest and deadliest starship in the galaxy
Outfit your ship with thousands of components and crew
Adventure with your friends with co-op multiplayer (only in full game)

The 120MB demo can be downloaded from the Official Site.

Here's a video showcasing some of the gameplay and co-op.