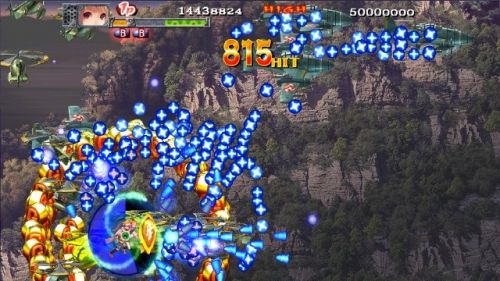 You could describe Rising Star Games as the Atlus of Europe. No, I don't mean they hold Europe on their shoulders - that'd be Atlas. They just publish really cool and sometimes niche games, including King of Fighters XIII (an Atlus title in the US) and region-free co-op shoot-em-up DoDonPachi Resurrection. Now Rising Star is expanding to the US, which can only be good for gamers. Their first American release will be Akai Katana, another Xbox 360 co-op shmup from Japanese developer Cave.

A fictional era resembling the years of industrial expansion in Japan, full of hope for reconstruction.

Amidst record-breaking economic growth and technical innovation, the people of this era discovered a new energy source, a mineral called Guiding Ore, which served as a perfect substitute for coal and electricity.

A powerful natural resource, this Guiding Ore held other mysterious qualities. It could be tempered into a blade, a Guiding Katana that endowed certain soldiers who held special symbols with access to a unique psychic power.

It was said that once this katana killed another human being, it would turn blood-red and endow its owner with an overwhelming power. It was this power that the Emperor Basho used to expand his reign, waging war on his country’s neighbors with an elite battalion who wielded the so-called blood swords.

Now a small squadron of rebels stands against his empire and its most fearsome generals. A struggle to shake the soul of justice and evil begins here.

Akai Katana is a 2D side-scrolling shoot-em-up with a 16:9 display. It supports 2 player local co-op. Both the US and European versions are expected later this year.

Co-Optimus spoke to Rising Star Games about their plans for the North American market. They explained their reason for branching out here:

Our website traffic tells us that people are coming to look at our site from all areas of the USA, online forums tells us we have a foundation of consumer understanding, interest and support already. We can build on that.

We've also learned that Rising Star will announce at least one more high-profile US release at this year's E3. Co-Optimus will be there when it happens, so stay tuned!