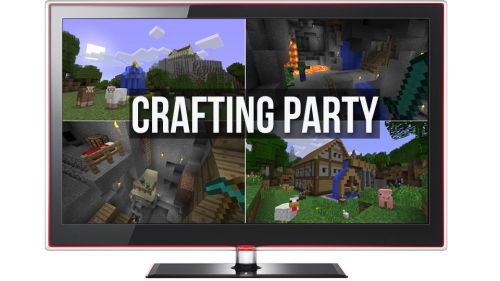 Just think about it. Up to 8 players can join a selected server and half of those people can be playing right alongside of you. Building anything spectacular in Minecraft takes very long time to create (without the help of cheat tools), mainly because of the time it takes to find and collect the natural resources, as well as dealing with enemy monsters that come out at night time (Watch out, the Creeper’s right behind you). Now with the ability to coordinate “gathering parties” all in the same room, building the Minecraft sculpture of your dreams can finally be achieved.

Even though PC users might not have the capabilities to do some of the things the Xbox 360 users might be able to do, doesn’t mean that Minecraft’s evolution as a game will completely forget its own roots. If anything, the 360 version will open the doors to the hundreds of thousands of gamers out there who could experience such a brilliantly designed game. Another big thing that people are concerned with is the lack of support for DLC through Microsoft. With Mojang constantly updating their game with bug patches and add-on’s, it would be understandable to think that the Xbox 360 version would not be able to keep up with all of the updating it does. However, just like Super Meat Boy and Portal 2, Minecraft will get these DLC’s as “updates” rather than having to pay Microsoft every time you’d need the lastest patch.

While we wait for Mojang’s legendary open-world game to hit the Xbox Live scene come Spring time, don’t be afraid to shell out a few dollars on the iPhone version of the game (which recently gained Survival Mode). Not only does it also support online co-op, but it'll keep your craving for the full version of Minecraft at bay until you are able to split-screen with your friends at home.

(Note: Picture Credit courtesy of Kotaku.  It was created with Photoshop and isn't an official portrayal of Minecraft split-screening).