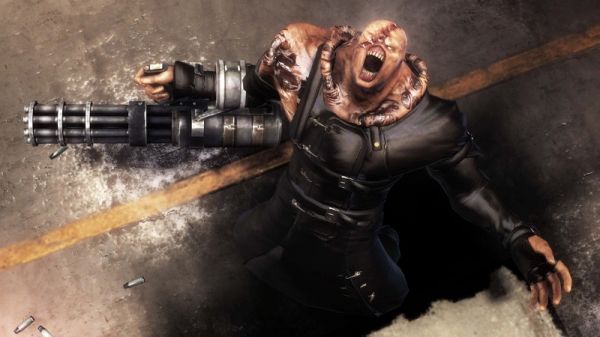 Good news, PC gamers!  Resident Evil: Operation Raccoon City is heading your way.  You'll have to wait until May 18th, but better late than never, I always say.

In non-co-op news, an exclusive versus mode was recently revealed for the Xbox 360.  "Nemesis mode" pits two teams of four against each other in an effort to take control of a mighty Nemesis.  He's a big ugly bullet sponge with a mini-gun.  You might remember him from Resident Evil 3: Nemesis, or the awesome Resident Evil: Apocalypse movie.  I prefer the silent subtlety of Resident Evil 2's Mr. X myself, but when someone offers you an indestructible murder machine, you can't be too picky.  Other videos have shown the Nemesis in the co-op campaign, so you may want to check out the following video and screens to see what you'll be up against.

Fantastic!  The 360 exclusive Nemesis mode will be available for download on launch day for 320 MSP, or about $4 dollars.  Yup, that's four dollar day one DLC, for those of you who are counting.  360 owners, please politely express your rage in the comments section below, or you can thank Capcom for doing more work on the Xbox 360 version.  Your choice.