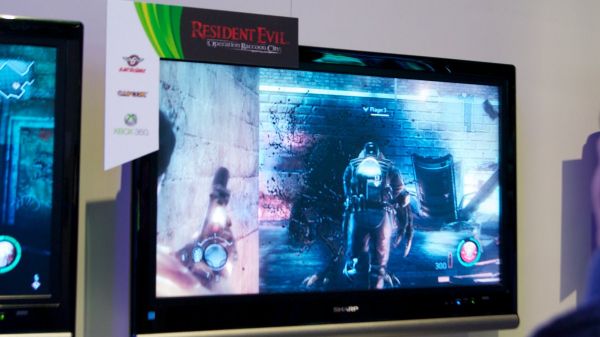 Resident Evil: Operation Raccoon City captured my attention the moment it was announced.  A four player squad shooter set during the events of Resident Evil 2 and 3?  We get to play as the evil Umbrella Security Service? That works for me.  I've been wanting to take out Leon S. Kennedy and his stupid haircut since 1998.

When the game was first announced it was speculated that the game may be a four on four versus game with some cooperative elements.  Nick and I both played the game at E3, and I'm happy to tell you that you can play the entire single player campaign cooperatively with three other people online (no word on split screen yet, sorry).  This is a squad based shooter, so friendly AI will take over the rolls of your other teammates if you choose to go it alone.  Think of something along the lines of Lost Planet 2, which was a great co-op game, also made by Capcom.

After one look at the line for the Capcom booth I decided to head on over to Microsoft's area.  They had third party games on display with super short lines.  After about five minutes of waiting I, along with three other players, were picking our characters.  I went with the heaviest looking one, Beltway.  There are six playable characters and they each have their own skills and abilities.  They fall into class rolls, such as recon, assault, medic, and sharpshooter.

After a brief cut scene (which will be familiar to anyone who has played RE 2) our session began.  The game has the over-the-shoulder targeting system we've become accustomed to from Resident Evil 4 and 5.  It did play a little faster than those entries, making the game feel more like a traditional third person shooter.

Zombies flooded the streets.  My team and I did what every game, movie, and common sense told us to do.  We started blasting zombies to pieces.  The Capcom rep demoing the game let us know that the zombies would never stop coming, and we'd soon be out of ammo if we didn't continue toward our goal.  Our objective had to do with hunting down a whiny, stupid-haircut-having, Chris-Redfield-wanna-be.  I charged ahead... ...and got taken out by zombies.  Respawn.  I stuck closer to my teammates, who had first aid sprays, and most importantly, firepower.  If the whole team went down it was game over.  As we played we came across other enemies from the early RE games, including Lickers and helicopter-deployed Hunters.  The US Special Forces team even showed up to add an extra element of FUn to the mix.  We didn't succeed in our objective, but the demo did what I wanted it to do, which was be awesome.

I asked the rep for some specifics about co-op, but he recommended I head on over to the Capcom booth for my questions.  I ninja'd my way past the line and spoke with Capcom Marketing Coordinator Mike Lunn.  It was he who told me that the game would have a fully featured co-op campaign. (When I played the demo I wasn't sure if I was just playing some superfluous co-op mode.)  I told him that we didn't fair very well in our mission.  That was when he accentuated co-op play, talking about how players had to work together.  He mentioned a zombie pheromone grenade that will release a blue mist which draws zombies in for easy kills.  There are also skill trees for each character, and I suspect there will be upgradeable weapons as well.  Resident Evil: Operation Raccoon City looks as if it will be a stellar co-op game when it releases this holiday.

I was super excited about the title, and then captain buzz-kill (Nick) came along and brought me back down to reality.  He pointed out some things I overlooked, and he was absolutely right.  I must have been caught up in my blood-lust for Leon Stupid Kennedy.  (That's what the "S" stands for.  Look it up.)  Nick pointed out that there were some key animations missing, like the ability to duck.  It then struck me as odd that every time I went to pick up ammo my character did a head stomp... and my session ended with a game crash.  There were some other issues that needed to be ironed out as well.  Don't get me wrong, Nick really enjoyed the game, too.  It's just that we think the game may be a little further off than the projected holiday release.  Here's hoping Resident Evil: Operation Raccoon City gets the development TLC it deserves.  It has the potential to be a brilliant co-op title.