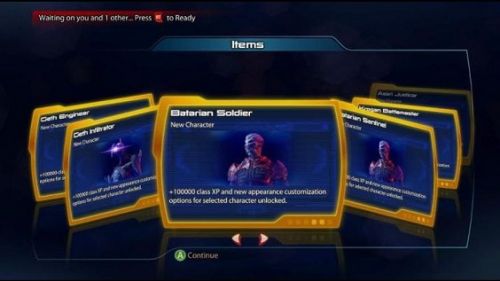 If my Xbox friends list is anything to go by a lot of Co-Optimus readers are currently playing Mass Effect 3, both in single player and in co-op.  The co-op maps may be fun, but I have played them all, shot all the bad guys and juiced up my hero to over Level 40.  I want more and this leaked image suggests that I will get what I want.

This sneaky pic is currently under strict Rumor Control conditions, but it looks real enough to my thoroughly untrained eye.  Bioware are apparently going to launch some new character types into the 4 player co-op mode; Geth Engineer, Geth Infiltrator, Batarian Soldier, Batarian Sentinel, Krogan Battlemaster and Asari Justicar.  There still seems to be a distinct lack of the Volus race - personally I would love to run around as the grumpy shorties, no more need to duck behind cover.

Speculation over at Reddit suggests that this DLC may actually be linked to the action figures Co-Optimus mentioned a few weeks back.  Whether the DLC will be a standalone pack, or come in dribs and drabs via the copious amount of Mass Effect 3 merchandise is anyone's guess.  What the image does suggest is that some form of co-op based DLC will be coming to the game – joy!