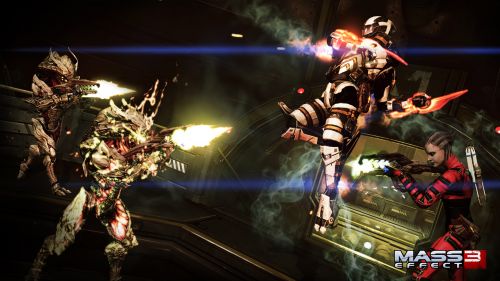 Mass Effect 3 is getting a large co-op content drop. The "Retaliation" DLC will include a new enemy faction, new Class Kits, "hazard" versions of maps, new weapons and upgrades, and a new multiplayer "Challenge" feature. It's actually one of the more impressive free DLCs I've seen. Yeah, you read that right. It won't cost you a dime.

The nefarious Collectors will be now be thrown into the bloody mix. Players will be able to unlock their weapons, which include the Collector's Assault Rifle, Sub-Machine Gun, and Sniper Rifle. Fend them off with new characters including Turian Havoc Soldiers and Turian Ghost Infiltrators. Battle across new "hazard" maps which are full of  traps and environmental dangers. This new "Retaliation" trailer looks very promising.

The new Challenge system will reward players with things like banners and titles. Everyone needs a kickass banner and title. The Mass Effect 3: "Retaliation" DLC supports four player online co-op. It will launch on October 9th on the Xbox 360, PlayStation 3, and PC. Once again, this DLC is free. Thanks to Engineer Seven for the tip!