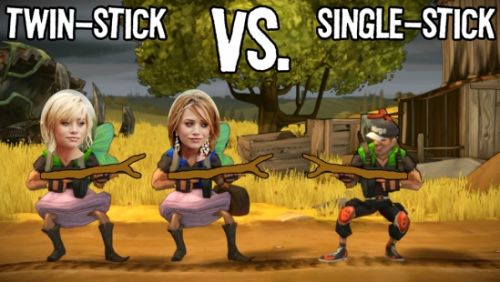 The gamers have spoken, and the fine folks at Demiurge Studios have listened. Well, sort of. It appears that many gamers had a hard time getting used to the single-stick controls in Shoot Many Robots. No smart developer wants to limit their game's accessibility, so Demiurge may be adding twin-stick controls to their side-scrolling shooter. Their solution? They're going to have a good old fashioned Stick-Off.  Wait, that doesn't sound right. I'll let them explain:

...we’re announcing the great Control Scheme Throwdown at PAX East in a couple of weeks. On display at our booth, we’ll have a special build of the game rigged with both control schemes. We’ll have head-to-head competitions of SMR featuring each of the options and at the end of the show a victor will be declared.

They don't really say how a victor will be determined. Will the contest be decided by who shot the most robots, who collected the most nuts, or who whined less about the controller configuration? Only time will tell. What will they do with this "victor" control scheme, you ask?

To show that we’re willing to put our money where our mouth is - if we end up patching Shoot Many Robots (which is not a certainty in the console world), we will include controller configuration in the patch and we’ll set the default to whatever wins at PAX!

So there you have it.  If Shoot Many Robots ever gets patched, they may add in twin-stick controls, if that control scheme wins a contest which has no set victory parameters. Glad they cleared that up. My guess is that they'll be adding twin-stick controls if they determine they'll make more money. That's the way things work. This is good news for gamers, because we love our options.  And if you don't change the last ten minutes of a hundred hour epic years in the making we will light the internet on fire! Oh wait, that's some other game.

Shoot Many Robots is out now for the XBLA and PSN. It supports two player local co-op, four player online co-op, and combo co-op. Our humble reviewer gave Shoot Many Robots a 5 out of 5 in our Co-Op Review.  When he was told about the possibility of a control patch, he mumbled something about being "old-school," and "superior."  Then he said something about "twin-stick-sissies," and went on a four hour long diatribe about how Contra III: The Alien Wars was the greatest SNES game of all time. Then he decided to quit bitchin' and wrote an article about it.

By the way, that creepy header image is from the Shoot Many Robots website. I wouldn't do that to poor P. Walter Tugnut.

Thanks to BigBadBob113 for the tip.