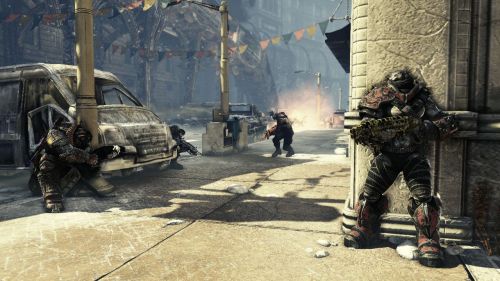 Everyone expects shooters these days to receive downloadable content down the line; it helps keep the multiplayer community going while bringing in the bucks. Gears of War 3 even went so far as to allow players to prepurchase its first four DLC packages at a discount as part of a Season Pass. The fourth and final Season Pass component, 'Forces of Nature' just launched this week. It packs five maps, four character skins, numerous weapon skins, the classic Guardian multiplayer mode, and of course, 250 GamerScore of Achievements. For players without a season pass, 'Forces of Nature' costs 800 Microsoft Points ($10).

The competitive Guardian mode returns from Gears of War 2. One member of each team is designated as the leader. Once he or she is killed, the other players can no longer respawn... So don't let that leader die!

Guardian mode should reinvigorate competitive matches, but what about co-op games? All five maps work in Horde and Beast modes, so no worries there. They even feature new Elemental Cleaver weapons with unique properties, which will certainly mix things up a bit.

Gears of War 3 supports combo co-op with two local players and up to five online players - see our co-op review for details. The 'Forces of Nature' DLC is free to download (through the game itself, not the Marketplace) for Season pass owners. Without a pass, it costs 800 MS Points. We'll post our 'Forces of Nature' impressions soon.