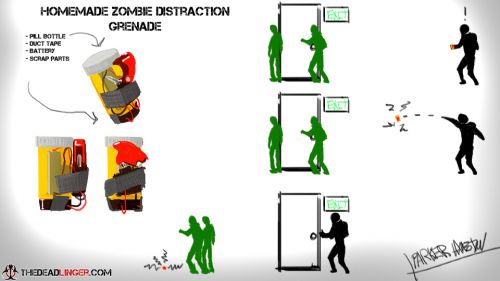 Sandswept Studios is pouring their heart and soul in trying to give us the ultimate zombie game, The Dead Linger; an open world, survival apocalypse game with almost limitless potential. However, they are going to need all of us to make the title a true reality.

Exploring a randomly generated world, you will have the zombie apocalypse to entertain you for hours on end. The thing is, with this game, there will be no end in sight. The Dead Linger will essentially becomes you’re playground (or survival ground for all of you pessimists out there) to do whatever you’d like in the undead world you’re given. Sandswept says it in the simplest way possible, "The goals you have are the goals you set; scavenging, exploring, fortifying, building, barricading, and of course, fighting off the zombie hordes."

And just what we all wanted to hear, they’re looking to make this game host up to 16 players online, providing cooperative and competitive PvP modes (most likely will be on the PC, but has yet to be confirmed)! Finally: a clan based, zombie survival game where you can pretty much do anything you’ve ever wanted to do. If they can pull this game off, I’d say they have a good chance at becoming video game legends.

Other than to help fellow gamers create great game that many of us have dreamed about, why else should you invest in The Dead Linger? Quite simply, 5% of the total it takes to complete this game will be going to the Kickstarter community, used to help those who are also trying to develop games to satisfy the wants of all gamers out there. And only at about 1/3rd of the way to their $60,000 total, the Sandswept development team could really use our help to be able to work full time to help polish and complete it! For only a $10 investment (if 6,000 people contribute), they'll most likely have their game ready for us within a year.

It’s hard to take a good idea and run with it, even harder if it’s a great one. This company decided to take their dream game and make it into a reality. But the only way The Dead Linger will get there is through all of us, the gamers who only talk about these games we want, but usually have to wait and wait until someone decides to make them. The time to act is now!