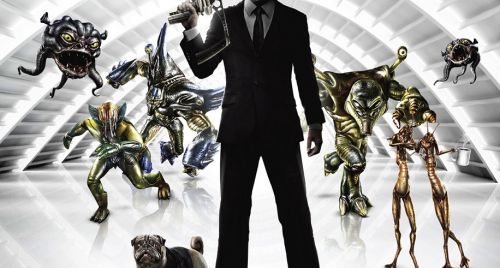 Summer is right around the corner, and with it comes a new batch of big budget movie sequels, re-boots, and their inevitable gaming tie-ins. Men In Black 3 is such a movie, and Men In Black: Alien Crisis is such game. We don't know too much about it, other than you'll be playing as Man-In-Black-in-training, Peter Delacouer, who I'm assuming will be named simply "P," if he makes the cut. Get it? It's a pee joke. High humor, indeed.

Men In Black: Alien Crisis is an on-rails light gun shooter and it is compatible with Activision's Top Shot Elite peripheral. Wii owners can use their Wii Zapper if they choose, while PS3 players can sub in the Move, if that's their weapon of choice. There will be no Kinect love for the 360, sorry.

Since the game is an on-rails shooter, you can count on a shooting gallery-style of game featuring creatures from the upcoming movie. Two player local co-op will be supported. The press release mentioned split screen co-op, which would be different from most on-rails shooters. We'll have to wait until the end of May to find out exactly what they mean.

Men In Black: Alien Crisis supports two player local co-op. It will be available for the Xbox 360, PlayStation 3, and Nintendo Wii on May 22nd, three days before the film hits the big screen.