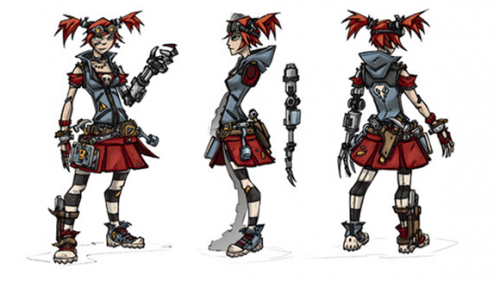 PAX East was full of surprises, especially during the panel with the developers at Gearbox. They has just announced that Borderlands 2 will be adding a new character class to their lineup, called the "Mechromancer" (a play on the “necromancer” class; a type of spellcaster who can raise the dead to do their dirty work). Being one of the few female characters to play as, the Mechromancer looks to be an equal dose of both machine and human, which will probably giving her the ability to have some level of control over mechanical objects (such as the large robot known as D374-TP (Called "Deathtrap", shown below). The Mechromancer is, however, still in the development stage, and will be made available as post-launch DLC character (made available for free to those that have pre-ordered the game). There is no announcement of the price tag for acquiring Mechromancer otherwise, but the Gearbox developers hope to price it "comparable to most DLC." Not only will this character be making it into the game, but players will finally also be able to customize their characters via assorted costumes and gear. To obtain them, however, they will have to be earned through means other than having just a large amount of cash. Acquired by accomplishing missions, specific challenges, and/or leveling up, players will be able to make their characters look their own, even going as far as obtaining new customized heads to make them look like a totally different playable characters altogether. Borderlands 1 players will be rewarded with an exclusive head and skill customization for owning the original game. Pretty sweet, right?

Although we’ll have to wait to play as the Mechromancer, at least we’ll have the excitement of yet another new character to join the Borderlands 2 gameplay.