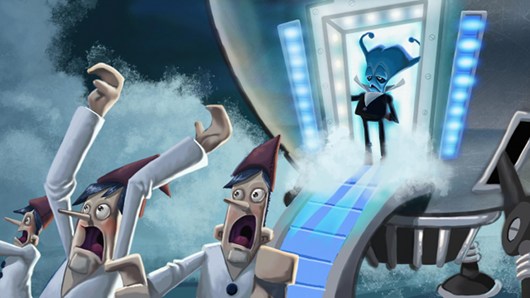 A World of Keflings, the XBLA-exclusive strategy/building game from NinjaBee, improved on the size and scope if its predecessor with great success. Despite the increase in magnitude, World managed to remain just as relaxing and charming as the original A Kingdom for Keflings. A World of Keflings will soon undergo another expansion, this time of the downloadable content variety.

‘It Came from Outer Space’ revolves around a group of marooned aliens of tiny, Kefling-like proportions. Players will venture to their new kingdom and assist them in building a variety of alien machinations and buildings (even robot Keflings), all with the goal of getting the stranded extraterrestrials back home. It’s sort of like Paul, but without the miscast voice of Seth Rogen or drug references. The expansion, like the rest of the game, will support both offline and online 2-player co-op.

‘It Came from Outer Space’ does not have a price or release date yet. The developers are touting it as a major expansion, but unless they want to charge as much as the game itself costs, 400 Microsoft Points is probably as high as they can go. In the meantime, I need to go back and finish the main game – and the first one!