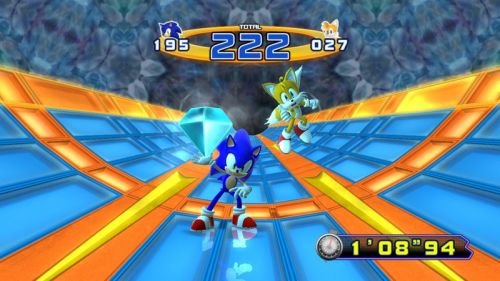 For a few brief hours yesterday, anyone who prepurchased Sonic the Hedgehog 4: Episode II on Steam had the opportunity to download and play a near-complete beta version of the game. Shortly thereafter, somebody realized the screw up, pulled the beta, and deactivated it from users' Steam libraries. Before that happened, several players managed to rush through the game, capturing some lovely new screenshots and videos for all the world to see. They even tested the 2-player local co-op!

Forum impressions from those lucky enough to play Sonic 4: Episode II in advance indicate that the game's physics have improved over Episode I's as promised. Sonic no longer loses momentum during jumps, and he gains some during rolls as well, though not as much as in the actual Genesis games. Stage design is said to show more personality than the previous episode's, though they feature an overabundance of boost pads, in this particular beta version at least. As for the quality of the music, opinions vary as always, but we can all form our own early impressions by checking out the new batch of YouTube videos the beta has spawned.

My bro and I played the first stage. Rolling physics are still screwed, but it's really neat. The camera pans for both Sonic OR Tails, meaning that Sonic's leadership position isn't as big as it was in the other games.

Tails swims indefinitely underwater and is controlled with the D-Pad. Button presses make him go faster.

Either character can activate a combination move.

Tails CAN fly without Sonic. He descends quickly but his flight time is pretty long.

If Sonic and Tails get separated from each other, they'll go into a ball and hover behind the other like in the [Sonic] Colors Sonic Simulator stages.

Now for two relatively spoiler-free videos. The first shows an early level, while the second reveals one of the 'Episode Metal' levels that unlocks for owners of both Episode I and II. It's taken directly from Episode I, with the twist being players can now control Metal Sonic instead of the blue guy. Beware of video creator ShadowofRui's YouTube channel though - he does reveal pretty much the entirety of the game in subsequent videos. Also note that SEGA could get the videos pulled at any time.

Sonic the Hedgehog 4: Episode II features both local and online 2-player co-op. It releases on May 15 on PSN and PC and May 16 on XBLA. We'll have a full co-op review around that time.