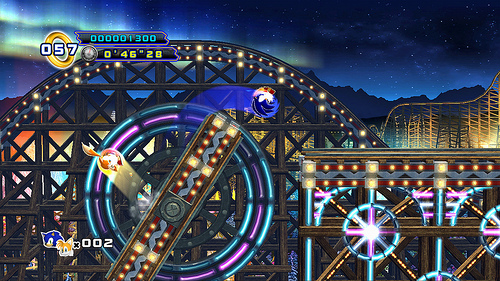 As you all know, Sonic 4 Episode II will be featuring the classic duo of Sonic and Tails, exploring a new age of the Sonic combos these two will bring forth. Collaborative gameplay is the name of the game between Sonic and Tails this time around, using 1 of 3 combos to help players take on the difficult areas of any stage. Kicking us off for today is the “Copter Combo”, which is the classic maneuver from Sonic 3 and Sonic & Knuckles of Tails lifting Sonic with his propeller fox tails to allow Sonic to reach areas which are inaccessible to him normally, such as platforms or tall obstacles. Pretty basic combo, but still a necessity for anyone playing as Sonic (Tails has it easy). Utilizing another of Tails’ abilities is the “Submarine Combo”, which covers yet another of Sonic’s fatal weaknesses, he never learned to swim. In a “scuba” like style, Tails can pick up Sonic and swim briskly through the water, which now gives Sonic a way to utilize his speed and overcome the underwater levels with relative ease. Collecting air bubbles is still a must, but Tails’ abilities make it that much simpler for the Blue Blur to do his thing. And finally, the more publicized “Rolling Combo” merges both Sonic and tails into one huge spin dash, which greatly increases their top speed and adds a destructive attack into the mix as well (can destroy enemies and the environment, for example). If you need to bring down the largest of enemies, obliterate giant objects, or even speed through snowdrifts, this move will be your best friend.

If you’re worried that you’ll need a co-op buddy for you to command these moves, don’t be. They will be available in both the single player mode, where you’ll always be playing as Sonic, but will control Tails only during the combos, and also in the two player mode. You’ll have to collaborate with your co-op partner, though, when to use the move and work together to unleash them at the correct time. There will also be other ways co-op will be included in this game, but have yet to be revealed to the public. Bummer.

Sonic 4 Episode II will be hitting the PlayStation Store and XBLA later on this spring, so be ready for the co-op combos to be unleashed in the not-so-distant future!