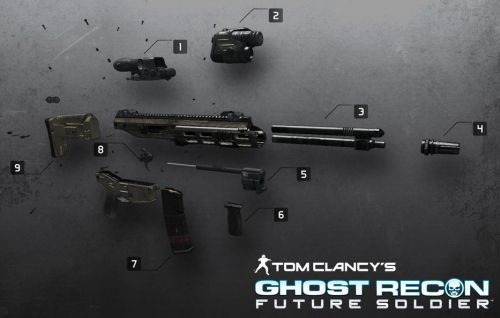 Tom Clancy's Ghost Recon series returns after a long absence this May as Ghost Recon Future Soldier. Ubisoft has taken advantage of the copious development time since GRAW 2 by adding lots of fresh ideas such as the new Gunsmith feature. They've even created a humorous trailer just for Gunsmith, which at turns had me either smiling or cringing, but did nothing to lessen my excitement for the game.

Gunsmith, disappointingly, is not about shooting down people named Smith. Back in high school I knew a guy with that last name who really stabbed my back. Then again, I sometimes treated him like a jerk before that ever happened, so I'm no innocent. Err, getting back to the game, Gunsmith allows players to swap out a wide variety of weapon parts in order to create the perfect gun for each situation. NRA members will surely eat the feature right up, right after they get finished drinking a twelve pack and shooting their neighbor's cat. Kidding, Jim!

Ubisoft is really pushing Gunsmith in a couple of interesting ways. First, the Xbox 360 version of Future Soldier specifically supports Kinect motion and voice controls in Gunsmith mode. That's fine by me, but there's no way the controls are as fast and fluid as the trailer depicts. If anything, it will be a slower and clunkier alternative to the Xbox 360 controller, which I'm sure we were all clamoring for... And I say that as Co-Optimus' number one Kinect fan.

More promisingly, the trailer plugs the Gunsmith app for mobile devices. The app is already available on iOS and Android devices and allows users to sample the full game's gun customization. Ideally, these apps would connect with Ubisoft's online servers and allow for transferring gun loadouts to the game itself, but they currently lack such connectivity. You might notice that Windows Phone doesn't have a Gunsmith app yet. Ubisoft has supported Windows Phone with a YourShape: Fitness Evolved companion app in the past, so even Microsoft's underdog mobile platform may get some Gunsmith love in the near future.

Thanks Jim for the Gunsmith app clarification!