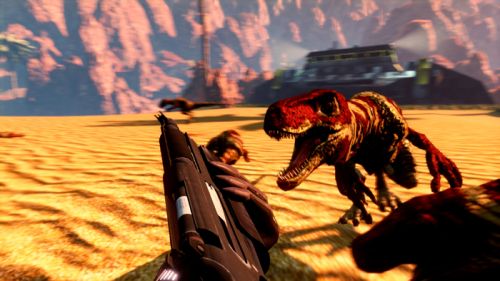 Orion: Dino Beatdown, the co-op-centric first-person dinosaur shooter, debuts on Steam in just a few more days. To help train the next generation of dinosaur hunters, indie developer Spiral Game Studios has released one last video documentary to tease the game before its release. Give it a watch (or simply read on) to find out about the game's worlds and the repitllian beasties that will inhabit them.

The following dinosaurs will attack players in waves:

Dino Beatdown will receive lots of free post-release DLC in the future. That includes three more dinosaur types (Triceratops, Argentinosaurus, and Stegosaurus) and lots more. With a purchase price of only $9.99 on Steam, it's sure to provide lots of bang for your bucks.

Did I mention we've got a contest to win the game on release day that you can enter right now? I totally should have!

Orion: Dino Beatdown supports 5 player co-op online and via LAN. It comes to Steam this Friday, May 4th. Co-Optimus will put the terrible lizards through their paces and wring out a full co-op review soon.