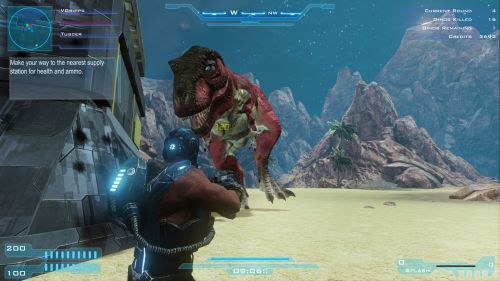 Several of the Co-Optimus staff were stoked for Spiral game Studios' Orion: Dino Beatdown prior to its release. Cooperative combat against carnivorous dinosaurs - how could you go wrong? Yet as Jeff Goldblum would've predicted, things did go awry at launch (presumably thanks to the fat guy from Seinfeld). The game released incredibly buggy and undercooked, prompting a necessarily harsh co-op review.

After a few hotfix updates, the developer went silent, which lead me to fear the worst. Had Spiral been eaten by the very dinosaurs they saught to revere? As it turns out, the studio was simply hard at work on a major update, appropriately labeled Title Update 1. That update has gone live, and the game is now on sale for 25% off to celebrate.

Orion certainly is shaping up. The menus and UI are far superior now to when the game launched. You can actually tel when you're getting damaged, especially thanks to the third-person view. That said, the character models look a bit wonky when running and I still wish for more visual customization options.

Survival Mode works much like the Horde Mode we know and love from other games, with enemies coming in waves and a brief downtime between waves. Running around blasting reptiles as a team is pretty much as fun as I hoped for. The only major problem I see now is that teammates can't revive each other. When you go down, you're forced to sit it out until the next wave. Boring! Let's hope that changes in a future update.

Speaking of updates, Spiral Game Studios promises the next free update will come along much sooner than this one. Title Update 2 will introduce the Triceratops and Stegosaurus enemies, plus a new level, all of which should add a welcome dose of variety.

Orion: Dino Beatdown is on sale at Steam for $7.49 this week, down from $9.99. If you were scared off by bad reviews earlier this year, now might be time to give the game another shot. It supports 5 player co-op online and via LAN, so friends can easily slay dinos together.