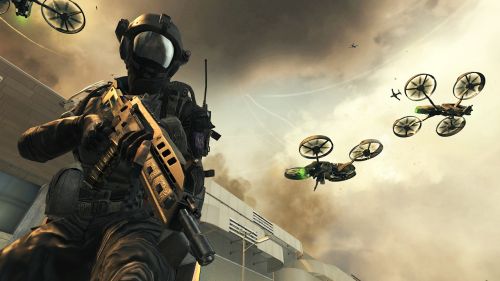 According to CVG, it looks like the move of the co-op zombies mode from it's own engine to Call of Duty's multiplayer engine could spell big things for Call of Duty: Black Ops 2 - namely 8 player co-op.  The reason for the expansion?  Apparently the add-ons were some of the best selling for the original Black Ops and World at War, giving the team "free reign" to do what they want.

It'll also be able to "handle a co-op tally double that of Black Ops 1's". Eight-player zombies mode? Sign us up. Although Treyarch is still being coy with the deets it has promised there will be some other fresh modes too.

While the last DLC for Black Ops had zombies on the moon, the inventive and entertaining Escalation DLC included Hollywood actors within the game.  If we're going to see more content like this, Black Ops 2 might be one of the more impressive co-op games this fall.

We've got a handful of new screens from the game to show off, sadly, there's no undead to be seen...yet.