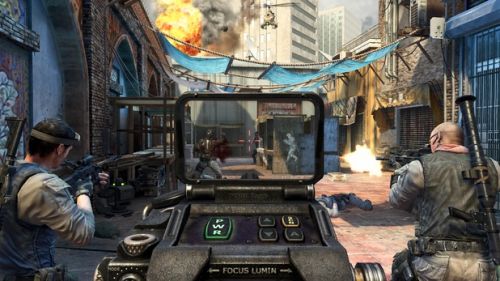 Call that a bullet wound solider?  That is merely a scratch.  Back in the day I would be out there glitching all over the place and no one could do anything about it.  Today you can be patched up and sent back into the field better than new.  So go forth Call of Duty: Black Ops 2 and prosper.  Check out Read More for the full details of the latest uber-patch for the 360 version of Black Ops 2.  Woo-Hah.

The most significant update this time round is the introduction of the Live Streaming feature to Public Matches.  Currently this is 360 only, but should be coming to PS3 soon.  The rest of the update is your usual tidying up of minor bugs, although by the sounds of the fixes, some of them could have been annoying.

Although not directly linked to the game's 4 player co-op zombie mode, several of the fixes will improve the experience from better connection to improved weaponry:

• Added support for Live Streaming in all Public Match playlists.

• Added a Cumulative Daily Pool instead of a Weekly Pool in League Play. 200 Rank Points are added to a player's pool every day. Points that are not used are rolled into the next day.

• Added 2 new pages to the Combat Record (the Combat Summary and Medals).

• Implemented sorting of Medals in the After Action Report.

• Added a "Go to Top" button for the League Leaderboard.

• Matchmaking modified to never return games outside of player's own continent, unless the Connection Type in Search Preferences is set to "Any".

• Addressed an issue where the UAV would not trigger if called in while aiming down sight.

• Addressed an issue where the Master Demolition challenge did not unlock when the requirements were complete.

• Addressed issue with the headshot sound not playing in final Killcams and Theater Demos.

• Fixed an issue in League Play where "Career Wins" for a Series were not displayed during placement in the Lobby Career Overview.

• Updated the After Action Report in League Play so that bonus points are not summed with the ladder points in points earned for the match.

• Removed the ability to make dual wield attachment combos in Elite Create a Class and addressed an issue where these classes were appearing as missing in game.

• Stocks on SMGs no longer allow a player to move faster while ADS than when moving normally.

• Shotgun crosshairs will no longer turn red if an enemy is out of the shotgun's maximum damage range.

• Fixed an issue where bullets would not fire straight immediately after aiming down the sight while moving at the same time.

• Current League Info is now getting updated properly in the Player Identity.

• Manual sorting on League Teams removed as the results are now returned correctly.

• Players can no longer earn credit towards a Prestige Equipment challenge through "friendly" flashbangs, concussions, and shock charges.

• Fixed Select Fire weapons reverting back to their default fire method when using certain Scorestreaks and not calling them in.

• Addressed an exploit where the game allowed access to the Custom Games Settings while believing the game was Public Matchmaking, allowing XP.

• Score and points are no longer awarded if a player destroys their own turret in Hardcore FFA.

• Addressed an issue where players were able to plant numerous Assault Shields.

• Addressed an issue where the Stealth Helicopter was able to drop below the map in Drone.

• Players are no longer able to get infinite Black Hats by immediately using another Black Hat.

• Addressed an issue where it was possible for a player to equip two Assault Shields at the same time.

• Players Spectating a One in the Chamber game no longer earn Survivor Bonus Points.

• A player can no longer earn Medals for multi-kills if they continue to kill quickly after dying and re-spawning.

• Various minor map fixes were made across multiple maps.

• SIG556: Penetration increased from medium to large, reduced burst delay, and maximum amount of bullets to kill is now 4.

• All: ADS in and out time reduced.