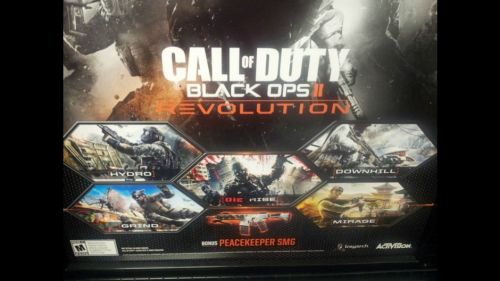 Activision appear to be about as leaky as a broken sieve.  Whenever new DLC is on the horizon for one of their big games information about it seems to be on the net faster than a suicidal fish.  The latest information to leak of out the Activision news cyst is about Call of Duty Black Ops 2's 'Revolution' DLC pack.

As with all rumors, gamers should be wary before jumping fully onto the bandwagon.  This rumor came about in the form of an image of a poster for the additional content.  The picture suggests that there will be four new multiplayer maps; Hyrdo, Grind, Downhill and Mirage, as well as one new 4 player co-op friendly zombie map in the form of Rise.

Additional information from MP1st suggest that this DLC will be made available from 29th January.  As usual, the pack will be included for those with a CoD Season Pass; the rest of us will have to pay the normal 1200 MSPs/$15.  Co-Optimus will be on hand if the news of this DLC is officially confirmed, in the meantime enjoy the image that is either real, or an impressive fake.