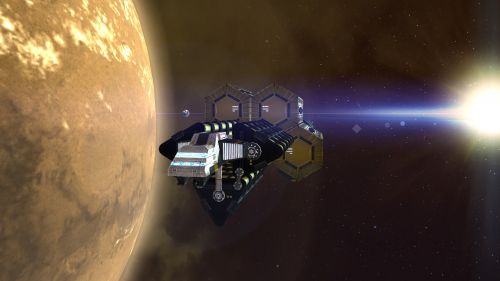 Kalypso have just sent over a handful of new screens for Legends of Pegasus, the 4X strategy game set to come out on the PC this summer.  Graphically the game is looking really good, but its the ship customization features and co-op play that has us the most excited.

Along with the screens come some background info on the game and its features.  We've posted that below.

The Story so far…

In 2231, humanity discovered a new power source which opened the way to the stars. Humanity built huge spaceships, colonized distant worlds and terraforming others in order to create habitable planets. This was a time of great enlightenment for humanity: while exploring deep space, mankind was united for the first time in its history.

But, as is always the case with man, his warlike nature got the upper hand. The winds of freedom led colonies to rebel against the government ruling from faraway Earth. Humanity was on the brink of utter chaos and the government was on the edge of collapse.

When all seemed hopeless, a seemingly friendly alien race appeared. These aliens shared their technological knowledge with us and brought the civil war to an end. While doubtful at first, Mankind finally accepted this alliance with these new allies, and allowed them to freely roam human space in a mysterious quest….

Then one day, without notice or warning, our strange new allies stopped sharing their knowledge and began regrouping their spaceships. When the first human planets were attacked by our former allies, we were taken by surprise. All our starships were called back to Earth to defend our homeworld and put an end to the attack, but the enemy was too strong. In the midst of this hopeless battle, a wormhole opened and swallowed a small group of human warhips. These ships ended up stranded in an unknown and unexplored galaxy. Legends of Pegasus tells the story of this little fleet…

What is Legends of Pegasus

Legends of Pegasus features an extensive campaign that will immerse players in a story that will have them encountering and commanding ships from the game’s three key races: Humans, X’or and Arthrox. As the story unfolds, the player will learn more about each race, and discover the true meaning of the “Legends of Pegasus”.

Along with the single-player campaign, Legends of Pegasus offers players a skirmish mode, for putting together quick scenarios, along with multiplayer modes for battling in real-time with other players via Internet and LAN-based play.

In both single- and multiplayer play, gamers will be able to play as the three races and 12 additional factions and guilds that are featured in the game. A deep technology tree will allow players to created new weapons, defenses and tools, while an Ancestry tree lets players customize their race to make use of special skills, such as increased trading abilities, boosted combat skills and more.