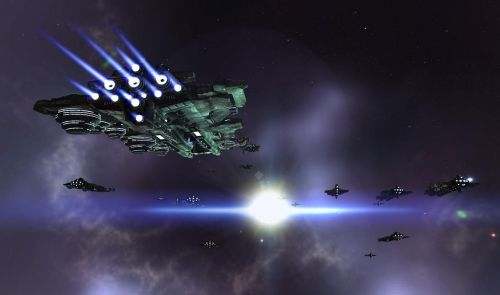 For "hardcore" real-time strategy fans, the thought of a 4X game, in this case Legends of Pegasus, that combines turn-based strategy planning with real-time strategy combat is likely one of those dream situations. The fact that it also includes cooperative gameplay is a dream situation for us here at Co-Optimus. But sometimes a dream is too good to be true until you've got a little more information. Fortunately, Charles Husemann of Gaming Nexus spoke with Novacore Studios, the game's developers, about what players can expect from this space adventure.

Given how long turns can last in a game such as this, one of the more obvious questions to ask is what do the other players do while waiting (aside from reading a book, or checking out your favorite co-op gaming website). Andre Overhagen, co-founder of Novacore Studios, responded with this:

Andre: The transition from turn-based phase to real-time is done through a dialogue, in which the player sees all the pending battles at the end of a turn. For players that are not battling at the moment, there is the possibility to watch the battles of other factions or to use some of the strategy features (editing ship blueprints, analyzing the empire screen etc.).

One of the common concerns for any game in this genre is that co-op will amount to little more than "co-op comp stomping." Now, I for one don't always mind a little comp stomping, provided the computer proves a good challenge, but it's always nice when there's a little more to a game's co-op mode. Fortunately, it seems like Legends of Pegasus will indeed offer more.

Andre: You can choose different winning conditions at game startup. Those could be: “Eliminate all enemies”, “Take over X star systems”, economic goals or a run to find a legendary planet which can only be done with high tech and a great empire management.

Finally, Andre addressed an issue that's common to a lot of RTS games: in the end, it's whoever gets the biggest guns/ships first. For League of Pegasus, it sounds like things may play out a little differently.

Andre: Every ship in Legends of Pegasus is valuable. We try to avoid a problem that players come across in other games, where at some point, you just choose a big bunch of ships and send them into battle and just hope everything works out fine. To avoid things like this, we limit the amount of ships a player can lead into battle. Additionally, ships gain experience by fighting so they can improve their skills. And the different abilities of the ships, like scanners and tractor beams, demand tactical skill and some amount of micro management from players.

No word just yet on when the game's release date will be, other than "second quarter of 2012," so we likely will have to wait a little while longer for some additional details to be released. So far, though, we're liking what we're hearing.