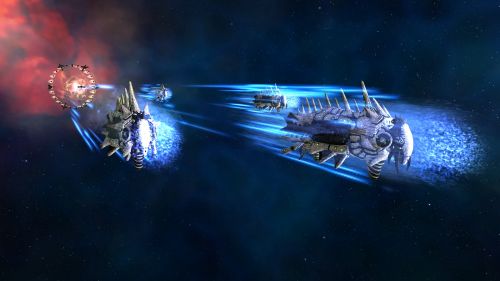 We love a good space game here around the Co-Optimus HQ, especially one that provides great co-op play.  It's because of that we've been keeping an eye on Legends of Pegasus, a 4X strategy game that not only looks good, it offers a deep ship customization abilities.  The latest screens for the game showcase the titles third alien race, called the Arthrox.

Here's what developer, NovaCore Studios, has to say about the race.

Arthrox ships are organic structures, made up of a head, body and propelling tentacles. When a ship is build, the hull (the h’aron) and the pilot (the saror) form a symbiosis, making the ship an individual. They tend to be long and cylindrical, which makes them more susceptible to portside or starboard fire. The Arthrox’s ships are very fast and agile but lack any strong armor, making them dependent on shields. The Arthrox like to use long-range particles and strong beam weapons as well as special weapon systems.

The Arthrox are a biological race currently divided into a multitude of tribes, each with their own queen. They are a very creative, communicative, high-tech race and get bonuses on research and diplomacy, while being handicapped in respect to their mining and production skills.

Legends of Pegasus will be released on the PC on August 14th and features two player online co-op.  It'll be available from various digital distribution services as well as retail.