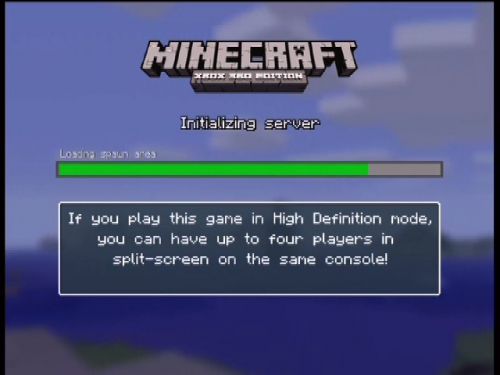 Soon after Minecraft: Xbox 360 Edition was released on XBLA, many consumers raised their hands up in frustration, feeling that Microsoft gypped them of their money. Correcting their mistakes, gamers who purchased the game are now given the opportunity to get a full refund for the game.

Eager Minecrafters that waited for months to play Minecraft were completely set back by the inability to play split-screen co-op on Standard Definition television sets upon release day. In fact, some players only bought the game specifically to play with the co-op elements this version had to offer. After quickly figuring out that without the HDTV split-screening wouldn’t be possible, more pressure was applied to Microsoft for not making this important detail more crystal clear to consumers.

It pleases us to inform everyone that Microsoft has heard you, agrees with your complaints, and recognizes that they should have done more to inform their customers more about needing an HDTV. To make amends, Microsoft is now offering those who have purchased the game a full refund by contacting the publisher through Xbox Live Customer Support. In addition to this, they’ve also changed the description on the Minecraft XBLA Listing to prevent more buyers from being “Mineshafted” further.

We updated our pre-sale notification to inform customers that an HD screen is required for the split-screen multiplayer feature on Minecraft: Xbox 360 Edition," said Microsoft in a statement. "If a player does not have an HD screen and purchased this game prior to the notification update, they are eligible for a full refund through customer support.

Not being able to experience split-screen co-op of Minecraft might seem like a big rip off for SDTV owners, but the perks of playing split-screen co-op does have its downsides. Reduced framerates and difficult to read texts that appear in local co-op can be a real mood killer for this game, so don’t feel like you’ve been totally gypped of an experience. Regardless if you aren’t able to play split-screen, Minecraft: Xbox 360 Edition is still a very enjoyable experience with loads more content on the way.