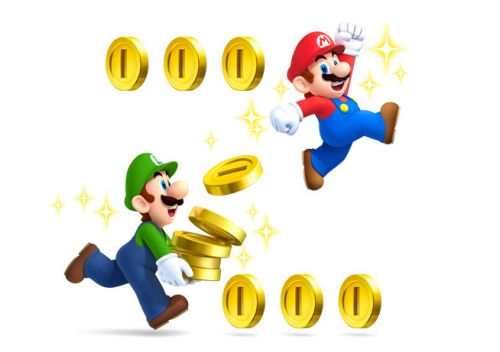 Just when I thought I was done writing about co-op in Nintendo's games, they go ahead and have a second (third? I've lost track) E3 conference about the 3DS, and we've now learned that New Super Mario Bros. 2 for the 3DS will support two player co-op throughout its campaign, similar to its bigger brothers on the Wii and WiiU.

Apparently, the goal of the game is to collect one million gold coins, which seems like quite a grind. Luckliy, just about every action Mario and co. take in the game causes gold coins to appear, turns Mario gold, or even into a coin block himself. We spotted the raccoon tail from Super Mario Bros. 3 making its triumphant return during its press conference trailer.

Asynchronous multiplayer via StreetPass is also available, and ties into players' ability to get higher and higher amounts of coins in a stage, and competing against other players for the high score.

New Super Mario Bros. 2 will be available on August 19th in stores and for download via the 3DS e-Shop.