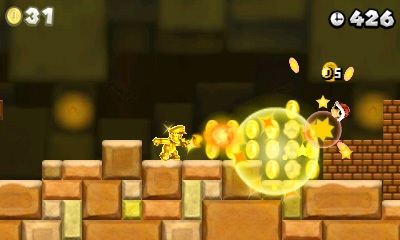 Premium downloadable content or PDLC is a highly contentious issue amongst gamers.on the one hand you have people who see DLC for a game and either choose to buy it or not buy it. Then there are folks to whom the simple mention of optional downloadable content is like being forced to eat a bag full of black licorice while watching Adam Sandler's Jack and Jill. Pure horror! Yet PDLC is here to stay, as evidenced by stodgy old Nintendo finally embracing it. That's right, New Super Mario Bros. 2 on 3DS will have microtransactions.

The upcoming platformer's DLC will consist of downloadable Coin Rush stages. Coin Rush is a new mode in which players try to complete three levels in a row with only a single life while collecting as many coins as possible. In other words, the mode is separate from the main game. New levels could breathe a little extra life into the title for people who've knocked out the main quest, provided they're priced right.

Given that this is Nintendo we're talking about, I can make two predictions: one, the game itself will be just as large as the last New Super Mario Bros. Nintendo isn't going to skimp on us. Two: the PDLC will be poorly implemented in some way. Whether it's an inability to keep the downloaded stages if you switch systems, lousy downloadable stages, or just a difficult downloading experience, something will probably be a bit off. Still, as someone who actually likes downloadable content, I'm excited to see how it's handled in this and future Nintendo releases.