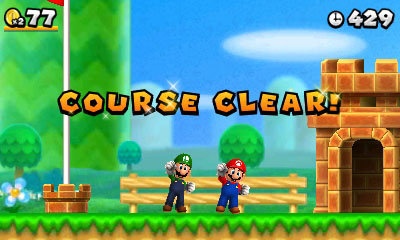 New Super Mario Bros. 2 for 3DS is less than two months from release, which means it should be pretty much done development-wise. In certainly looks that way, judging from the huge batch of screenshots Nintendo released this week. We've chosen our favorites to share with you now, including lots of shots with Mario's co-op partner Luigi tagging along. You can tell the green guy's loving the modern cooperative gaming renaissance.

What do you think, guys? Too similar to the first DS game or no? Not in my eyes. I'm seeing tons of great elements borrowed from Super Mario World and Super Mario Bros. 3, plus the new items we come to expect from a Mario sequel, such as that crazy box thing on Mario's head. This game will certainly make it tough for me not to pick up a 3DS XL, regardless of its foolish lack of a second circle-pad.