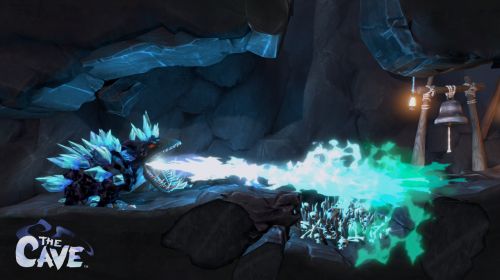 One of the games I was really itching to check out at E3 was Ron Gilbert/Double Fine's recently-announced The Cave. As luck would have it, it ended up being the very last thing I was able to get an appointment to see, and I think we're in for a real co-op treat.

The Cave is a story of seven characters, who are all drawn to the titular cave to learn something, find someone they've lost, or even find true love. Similar to Maniac Mansion, you pick a party of three of the seven to take through the Cave and solve its mysteries. The Cave itself is a character, who narrates the tale and gives a little gentle assistance to our heroes should they perish. Bringing different characters along will allow access to different parts of the world, themed to your particular party members and their abilities, which should increase replayability quite a bit.

The world is navigated like a 2D platformer, very similar to The Lost Vikings. There are simple environmental puzzles that need the characters to work together to pass, and more traditional adventure game puzzles. Oh, did I not mention that this is also an adventure game in the classic model?

The puzzles we were shown were definitely true to the Ron Gilbert's Lucasarts roots, and even included a bonus Secret of Monkey Island reference (a New Grog vending machine). In the first, a rock monster/dragon is blocking the path of our heroes and needs to be dealt with, but all we have is a bucket of water, which isn't going to help. Or is it?

A little exploration reveals the aforementioned grog machine next to a hot dog vending machine, a spike pit in front of the monster, and a claw crane above the spike pit. Well, the hot dog machine is out of water, so our Scientist uses the bucket to fill it up, giving us a gigantic hot dog, which she tosses onto a stake in the spike pit. The monster is lured over and begins eating, then the Hillbilly turns on the claw crane, which drops to the monster and picks him up by the tail, allowing our party to proceed.

The next puzzle we were shown was an example of using each character's special ability to proceed. In this case, the Knight has a guardian angel who can protect him from harm. We need to retrieve a medallion from a princess who seems to disagree with our desires, so we need to steal a dragon's treasure. The Scientist was already positioned behind the sleeping dragon, so we try to just sneak in and grab it, but the dragon has a habit of shooting fireballs in its sleep, toasting our poor character. So it's up to the Knight to distract the dragon. Since the guardian angel protects him, we use it to distract the dragon while the Scientist sneaks in behind and grabs the treasure.

We start to take it up to the princess, when the dragon notices two things: one, his treasure is missing, and two, we left the door to his chamber open, so he escapes. While bringing the princess our prize, you hear the dragon wreak havoc all throughout the castle, and when we finally get to the princess' chamber, we see the dragon chewing a suspiciously princess-esque pair of legs. Luckily, he spits out the medallion we need before he leaves.

The best part about all of this is that The Cave supports three player local co-op. Solving adventure game puzzles with friends as a kid was always one of my favorite kinds of emergent co-op, and the ability to play a game like this with a buddy or two should prove to be great fun. I can't wait to get my hands on it.