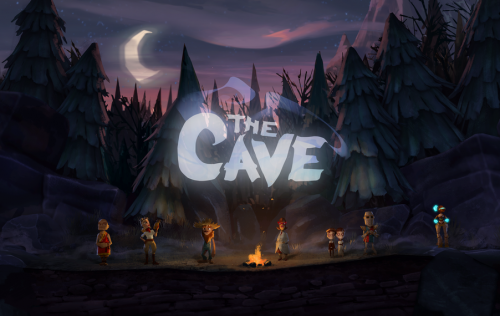 Ron Gilbert and Double Fine Productions are working together to bring us a 2D side-scroller combination of Blizzard's puzzle-platformer, The Lost Vikings, and the old school, LucasArts adventure game, Maniac Mansion, known only as: The Cave.

Putting the player in the hands of seven different characters: the Monk, the Adventurer, the Hillbilly, the Scientist, the Twins, the Knight, and the Time Traveler, The Cave tells their story of exploring a mystical, talking (yes, I said talking) cave for their own personal quests . Instead of choosing only one character to play as throughout the entire game, you’ll get to choose 3 to swap in and out as you play and use their special abilities to solve puzzles and progress in the story. Depending on the team you choose to play as, there will be multiple solutions for any given puzzle and different conclusions to each game, making The Cave a new experience each time you play. At first, this game might seem like a normal platformer title, having common platformer elements like being able to jump, climb, and swim around the environment. However, various items found shrewd about the caverns have significant impacts on the puzzles needed to be solved. It is important to pick up anything and everything you’ll find for use later on, making this game as much a quest as a puzzler. Gilbert and the development team at Double Fine want players to feel like exploration is the most important aspect to this game.

If puzzles are your thing, then The Cave will definitely throw you through a loop. What may seem like a logical solution to a problem, most of the time it won’t be the case. For example, if the Scientist wants to fix a broken vending machine, only a bucket of water will magically repair it (sometimes logic isn’t the answer). More for fun than for the hardcore gamers, the goofy puzzles presented are a part of the comical theme that they specifically wanted this title to offer players this time around.

Unfortunately for us, no online co-op or split-screen option will be available for this game. However, one or two other players can join in and each control one hero of your team (as long as everyone’s characters remain on the same screen). This makes The Cave sound like a great, future couch co-op title to add to our gaming libraries, especially if you are a fan of thinking games.

The Cave will be available for download on the PS3, 360, and PC early next year.