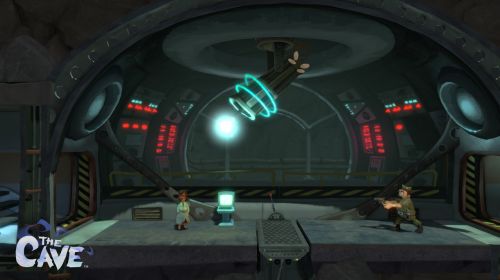 For me, The Cave was one of the standout games I saw at E3, in no small part due to the fact it's an adventure game by Ron Gilbert and Double Fine. Sure, there's some pesky platforming involved, but don't be fooled: this is an adventure game in the old style, complete with logical-yet-nonsensical puzzles and the trademark Double Fine humor. We weren't able to put hands on the game at E3, but when we heard a more recent build would be playable at PAX, I told Nick we needed to make an appointment post-haste.

Since I was in control this time, I decided to choose the Time Traveler, The Twins and The Monk as my characters. I had seen the puzzle I'd need to be solving during our E3 demo I had a general idea of what needed to be done, but the introduction had been changed and the puzzle was more or less finalized, filling in the steps that we heard were left out of the E3 build.

New to us was the fact that the titular Cave has an employee charging for access to the wonders within and he gives you your first goal: to bring him three "treasures" from within the employees-only supply closet so he'll let you into see the good stuff. From there, I navigated my trio to the familiar-to-me set of switches and vending machines that set up the first real puzzle: getting past a wicked lizard and a big spike pit. Since I knew roughly what to do, I set my characters up to solve the puzzle before I realized that there were a few new steps that needed to be taken. Rather than simply grab the items I knew would be required to lure the monster into eating a hot dog thrown into the spike pit so I could use the skill crane to trap him, I had to figure out why power to the vending machines was inactive (audio cues helped me with this), then reroute the power, grab the hot dog and move onward.

I probably shouldn't have admitted to Locke that I knew how to solve the puzzle, because he told me I looked like some kind of crazy adventure gaming savant while he watched me play the demo. At least now I know what I could do to try and convince him that I'm a powerful sorcerer.

I do have one concern - the game only supports local co-op as far as we know, and the puzzle I solved relied heavily on positioning your trio of characters pretty far away from one another and switching between them to trigger switches, which is fine, but we haven't seen any kind of information on whether the game uses a shared or split screen - the logistics might get weird. Hopefully in the coming months we'll get some more solid details on the co-op.