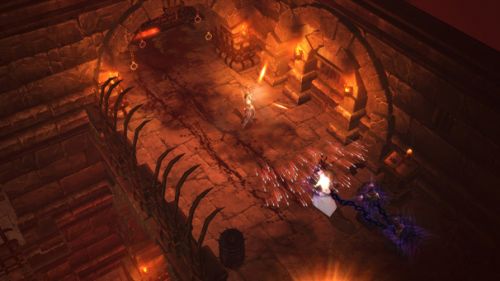 Diablo 3 has gotten a new patch which brings a major change to co-op gameplay.  Previously as more players joined your game, the difficulty of monsters would scale up - this included not only their health but their damage.  The patch has removed the damage scaling but left the health scaling in tact.  It's a curious change, one that Blizzard hopes encourages players to play co-op more.  The patch also makes pots drop less gold than before.  I guess calls from the anti-pot destruction league worked.

In other news, the much lauded Auction House feature is set to go live on June 12th.  The game will experience some significant downtime tonight as those features are brought up.  When they are finally live, players will be able to sell their loot for real world money to other Diablo 3 players.  There's a catch though.  To use the auction house you'll need to have a Blizzard Authenticator linked to your account.  The authenticator can be both a physical device or an app that runs on your phone.

Finally if you follow technology news, you already know that Diablo 3 was in the headlines yesterday with Apple.  Why?  Because the game will be one of the first to natively support the Retina Display MacBook Pro.  The next generation notebook measures in at 15.4 inches, and a pixel resolution of 2880 x 1800 which comes out to 220PPI.  The game should look incredibly sharp at this resolution, but we wonder just how well it'll perform on the system.  My guess is you won't be able to run it at max detail settings.