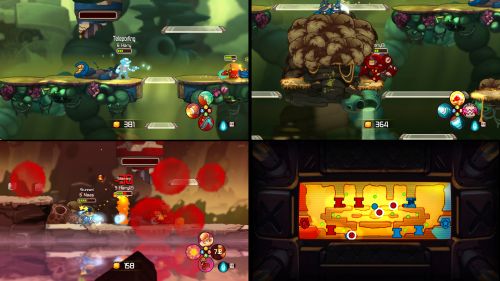 Everyone's favorite* MOBA for the consoles, Awesomenauts, is getting an update to help ensure the game is well and truly balanced for all. Tweaks like this are quite common for a game within this genre, or really games as a whole. After all, any game that involves mutliple characters with various skills may not be quite perfect enough at launch as players will always find ways of using (and exploiting) skills and abilities that developers may not have anticipated during development. Awesomenauts is no exception to this as the bulk of changes being made are just these types of tweaks.

- [Voltar's drones] are too effective at tanking turrets and their maximum damage output is a bit too high. So we've reduced the drone base health and replaced the Force Fields item with an item that makes the drone shots blind enemies. To compensate, the drones now explode and deal a bit of damage when they die. This ties in with our second change: replacing the second shot damage item with an item that improves their explosion upon destruction. Both these changes make the drones better at support and defense, as they were originally intended

- Upgrading Leons tongue ability, while sacrificing your melee damage, will now be a relevant strategic option

- Lonestar's bull will get an item that makes it explode on death, dealing some hefty aoe damage. This item will replace the bull speed upgrade

- We've also replaced the Power Pills Turbo items with an item that increases your health by a small amount for free, once. This will be a useful tool for players who want some extra early-game power at the cost of more late-game oriented items

Now, as someone who hasn't touched a MOBA since co-op was added to League of Legends, I can't say whether or not these changes are good, or are the types of changes that will seriously break the game and enrage gamers everywhere. Hopefully it's the former. There's also no word on the previously rumored addition of new characters to the roster, which perhaps isn't too surprising given that these types of changes need to work themselves out before tossing anything new into the mix.

No date has been given just yet for when the patch is expected to be released, as all changes are being packaged together along with some improvements to the game's matchmaking system, but we'll keep you updated as soon as we know more.